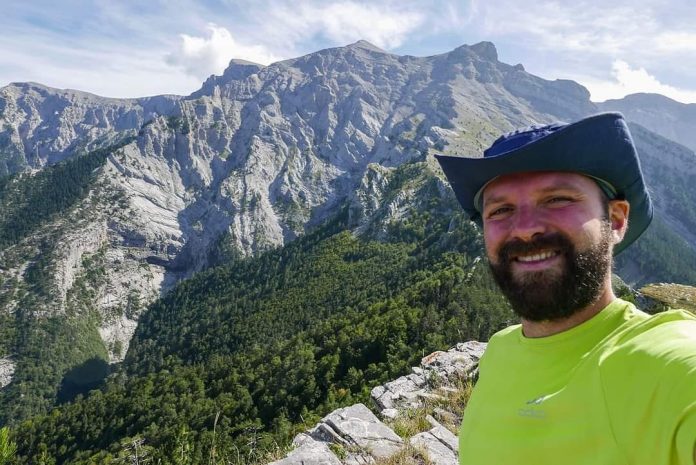 A difficult mountaineering project that was successfully completed

After 14 days of a solitary march on the mountain of the gods, Mount Olympus, the volunteer of the NGO Hellenic Rescue Team (HRT), Lorenzo Nerantzis, completed the Olympus 12 Refuge Trail, a hiking effort that took place for the first time in Greece. In this solo hiking journey, he managed to “unite” the 12 most famous mountain refuges and emergency shelters of the highest mountain in the country, aiming to raise awareness among those involved in mountaineering about the importance of prevention and proper preparation, but, at the same time, to highlight the role of the Hellenic Rescue Team in mountain rescue in Greece.

His effort started on 22nd of September, from the Mpountolas refuge, located above Litohoro, and was completed two weeks later at the “Spilios Agapitos” shelter. On his way he visited both the organized refuges and the emergency shelters in the most inaccessible areas of Mt Olympus (Koromilia, Petrostrouga, Krevatia, Apostolidis, Kakkalos, Laka Christaki, Salatoura, Agios Antonis, Migotzidis and Livadaki). The difficult weather conditions he encountered along the way and the demanding routes he followed, delayed its conclusion for a few days. However, his project was completed successfully, thanks to the valuable support of the Hellenic Rescue Team volunteers and the mountaineering community of Olympus.

According to Lorenzo, the greatest difficulties he encountered were the heavy backpack, the lack of supplies at the emergency shelters, the fatigue after many days of walking and the difficult weather conditions that prevailed in many parts of the route. Nevertheless, the use of radio and the selection of good climbing equipment were critical to the success of the project. Moreover, the effort highlighted the crucial role of emergency shelters, in which both Lorenzo and many climbers find protection during bad weather conditions.

During his trip, Lorenzo became aware not only of the importance but also of the wide level of coverage that HRT’s hum radio network offers on Mt Olympus. Throughout the route, he was able to communicate with his fellow HRT members in Thessaloniki through walkie-talkies. The radio network permits the daily communication between the shelters and climbers, while it has been widely used the last 25 years in every rescue operation on Mt Olympus and the entire Greek territory.

By posting photographs and stories on the project’s social media accounts on a daily basis, Lorenzo sought to highlight the hidden beauties of Olympus and especially those of the south side, which despite the increased traffic in recent years, are unknown to most visitors.

It is worth noting that his project also aimed to support the volunteers of the HRT, through a crowd funding campaign. Already 110 people have supported the fundraising, with a total amount of 1,855 euros, while four days are still remaining to complete the campaign.

The amount to be raised through donations will be used to purchase necessary rescue equipment for the volunteers of the organization, which in this very difficult period of the pandemic, continue to offer seamless and selflessly their services to all of those whose life is at risk.

Hellenic Rescue Team is the only voluntary organization in Greece with such an active role in mountain rescue. Since its founding in 1994, it has been contributing to at least 15 incidents per year, most of which occur on Mt Olympus. HRT volunteers are on the mountain on a daily basis, especially during the summer months, when there is an increased number of visitors, in order to be able to help immediately in case of an accident. Moreover, the organization manages successfully the Petrostrouga refuge, which serves as the base of its members, for the last 9 years.

Lorenzo Nerantzis is an experienced rescuer and member of HRT since 2006. He is actively involved in mountain rescue and he participated in many trainings, exercises and rescue operations in various fields in Greece. He is a licensed radio amateur (SV2SDP) and trainer in the Department of Research, Technology and Telecommunications. He is an economist (alumni of Aristotle University of Thessaloniki), speaks 4 languages and has professional experience in Latin America and Africa.