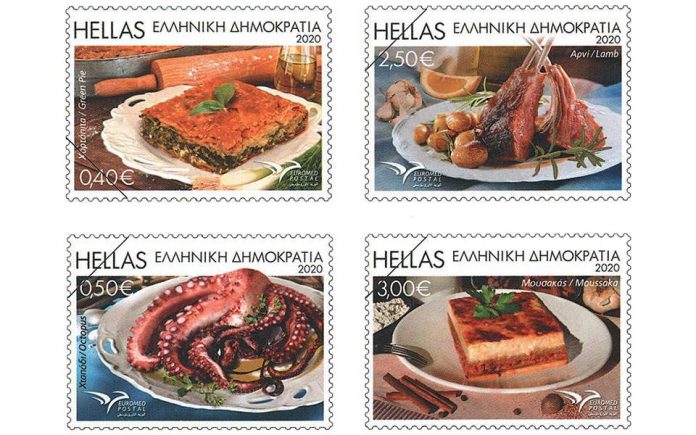 What is Greek gastronomy? What are its roots, how did it evolve through the ages and what is its future in the 21st century? How do we talk about Greek culinary culture today and, more importantly, how do we introduce it to people who have no particular knowledge of it?

At the Greek postal service, the Hellenic Post (ELTA), the answers to such weighty questions that have tormented food theorists, restaurant critics, chefs, experts and lay fans of Greek food for years are absolutely simple and summed up in four recipes: oven-baked lamb and potatoes, moussaka, boiled octopus and wild greens pie.

ELTA sums up Greek gastronomy with these four dishes – photographed slipshod like a 1980s illustration in a taverna menu featuring everything from pizza to souvlaki and stuffed tomatoes.

Or, to be more precise, it “pays tribute” to Greek culinary heritage, according to the recent press release announcing the initiative.

The special stamp series that was launched on July 20 unfortunately embodies many of the stereotypes about Greek culinary culture, stereotypes it has been desperately trying to divest itself of so that it can move forward, evolve and claim a strong presence among other cuisines of the world, with a distinct and modern profile.

Even the press release outlining why these four dishes were chosen to represent Greek cuisine was rife with clichés: “Cooked food hails from ancient Greece, with recipes that are both simple and complex… World-renowned moussaka, an emblematic dish of this country, is not found anywhere else in the world as we make it. It is a dish that unites the West with the East.”

We all agree that our culinary traditions are an important part of our identity, a part of our cultural heritage that needs to be promoted and celebrated, especially when it is a key component of the effort to bolster Greek tourism competitiveness.

But when food is one of the hottest, strongest trends in the world, when it is such an intrinsic part of pop culture, there is absolutely no room for such amateurish errors.

In short, if you want to send a letter in the age of email, do it with style or don’t do it at all.